How many Internet accounts do you have? How do you keep track of them? You start with the ones which have good strong Sarbanes-Oxley enforced rules about keeping your password encypted, even from themselves. And then somewhere along the way, you say aw what the hell, and you end up using the same passwords, skipping across the boundary to the places which will send you your password if you forget it. Which pretty much means that they can see it too, not to mention the general public, since you know, you must consider email to be "published" unless you're a fool. Your emails are never private, silly people.

And so, the more accounts you have, the more nearly certain it is that if someone had a motive to hack your identity, it would be absurdly trivial. So, what are you going to do now? Run out and change all your passwords? And then deal with all the notices that your password has been changed and if it wasn't you that changed it, please call immediately? Like trying to change your insurance company, it just triggers access to your credit score, which gets debited with the access because, you know, you're trying to do something. And you start to feel boxed in and paranoid.

So, Toyota now, by doing the right thing, is getting cruelly gamed by all the other desperate car makers, gleeful that it wasn't them whose accelerator was sticking. Now, I've gotta tell you that, first of all, I'm pretty sure that I've driven a lot more than you have, and second of all, I spent much of my youth messing around with go-carts and mini-bikes, and third of all if you add up all the things which can go wrong on a car, a stuck accelerator is about the most likely, and when it happens to me, it kind of just makes me laugh. Well, unless the engine's bigger than it should be, in which case it can be pretty terrifying, which is how come I like the fact on a motorcycle you can actually just dial it back the other way, not depending on the spring.

But who really knows how many accelerators get stuck each and every year and never get correlated? So, now that Toyota has done the right thing, how many people are just simply assuming that their stuck accelerator is sticking for the same reason that everybody else's is and it must be somebody's fault? There has to be somebody to pay for it.

I think it's kind of funny that Toyota, the biggest car company in the world, still can't really put their finger on what went wrong. Like that Tylenol scare way back when they recalled all the stuff, and it turned out it was someone right in the store, and not in the factory, contaminating bottles. I'll just bet some Very Quiet Person was deliberately tinkering with the cars somewhere along the line. Who knows, maybe it was someone from General Motors, you know, the way that we blame the Chinese government for snooping our emails. When it might just have been someone who thought they were doing what Big Brother would want him to do if he, Big Brother, were to take the risk to say so.

What will happen when they get into our water? Or like when the Shrub was running against John McCain, and McCain was gaining ground, and the Shrub's campaign would do better if people just stayed home, so what risk did they take by going negative? By luring McCain in the same direction. Because if they both went negative, McCain's voters would just stay home, since they were only interested in the first place because they had fallen for the idea that someone could run for office as a "maverick", as if you don't have to be an insider even to get that far.

The thing to do, when someone sends you on a Snipe Hunt, once you figure it out, is to have a good time anyhow, along the way to snaring this creature that doesn't even exist. Like yesterday, when I went out looking for a pot rack among overstocked shelves, where they had already decided to relinquish that shelf space to the Internet. Because there's simply not enough traffic in pot racks, and it would tie up valuable capital. Time being money and all.

Still, you can't quite believe that they don't have an awful lot of capital tied up in the mountains of identical widgets, hanging all the way up to the ceiling to where they need these scary scaffold ladders to even reach them, and surely no-one can buy them from up there, but it must be that if you see that many of the same widget your subconscious brain tells you that you had better have one too. That kind of capital sitting on shelves must be a kind of motivator, even better than advertisements, which no-one pays attention to anyhow.

Except that Barnes and Noble seems to have figured out that you have to allow the rare walk-in to find the obscure books if you're going to be able to sell the ones you put right out front in everybody's faces. You'd think that having strange things like pot racks would actually draw more people in, but then what do I know? I just like Snipe Hunting sometimes. I don't mind playing the fool. 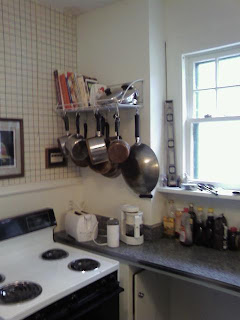