Although I'm not settled enough to be a subscriber, sometimes I think the Buffalo News is written exclusively for me. The other day, I saw a notice for the Boom Day ball drop. I rode my bicycle along the breakwater which goes under the Peace Bridge where I was pretty much the only one to watch the event. I'd expected at least a small crowd. What people had come were all dignitaries on the Fireboat, but I still felt the hosing was all for me! 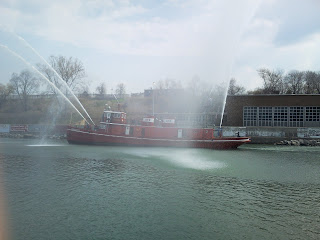 WHAT A HOSER, EH?
Then yesterday, I decided to see how hard it would be to bike down to the Small Boat Harbor, since the News had indicated that one of its new draws is a bike path. Along the way, I found that I could ride up to the top of a parking ramp alongside Pilot field, and watch the ball game as though I'd bought a ticket. Whoops! Coca-Cola field. I find on Wikipedia that I've blown right by Dunn Tire Park. Well, anyhow, it's the home of the Triple-A Bisons. Whoops, I guess that's "International League." I'm so out of touch. Or do even names just go to the highest bidder now?

From my perch on the parking ramp, the stadium looked pretty empty. I had a blast zooming back down the levels, although it sure did look as though the beams were going to clip my head off. You can't ride your bicycle over the Skyway Bridge anymore, so if I wanted to get to the Small Boat Harbor, I was going to have to do the drawbridge thing. It made me a little nervous, since I'd bicycled down there the other day to the General Mills plant, where they make Cheerios, and the young guard told me "you can't be here" even though it looked like a public road. They must have worried I would be secretly counting rats or something.

I'm a little skittish about these things, like the other day when I pulled aside to let the siren by and then the cop figured I must be guilty of something so she followed me off to the side. You know, you try to do the right thing . . . like I eat Cheerios all the time for my high cholesterol. Why don't they want me hanging around?

So I ended up biking down this long and really lonely, and very wide thoroughfare, feeling like I'm in a Hitchcock movie, knowing all the while that this used to be bustling with factories and businesses of all sorts. The one newish and clean  looking plant had a realtor's sign on it, which can't be a good, um, sign. I checked on my handy smartphone, and sure enough the place had been closed down upon buyout. I guess this is more evidence of the efficiency of our capital markets.

Eventually, I did get down to the Small Boat Harbor. It's a Sunday, and the weather is fine (although thunder storms had been called for), but there isn't exactly a crowd there. 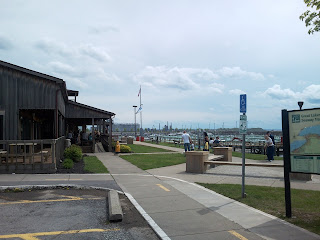 But there are people in Dug's Dive, and there is a bike path. It's still early. I'd learned from the News that the Harbor had been opened two weeks early because of our fine spring, and I guess the boats were still on their way in: 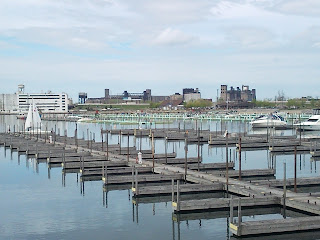 You know, it's actually a bit tricky to follow the designated bike paths around Buffalo. Some places have signs, and sometimes you can see the faded outline of the bike path on the roadway - washed down from the famously harsh winter - but then sometimes it just seems to end, and you find yourself on a road where no-one else seems to have ever thought of biking.

The same thing happened in reverse when I biked past the Small Boat Harbor. This time there was a brand new asphalt bike path, which still has yet to be completed and doesn't have it's painted striping yet. I followed it along, past the smoking fishermen - I think that might be a reason to escape to such places; you can smoke in public. Well, it would be public if anyone else were around. 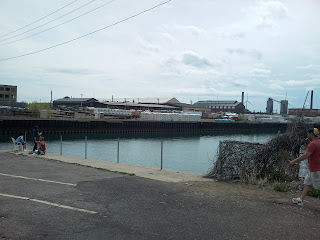 I ended up at the old headquarters for the long since closed Bethlehem Steel Plant, which looked far worse up close than it does from the highway, although its grass was mown.  It is a beautiful structure, and I was struck again how much the old business edifices, striving for a kind of legitimacy, look the same as schools from the era, striving for the same. 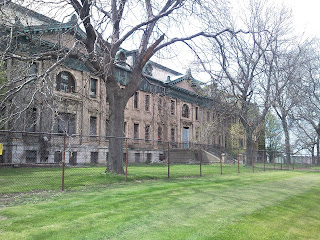 I sat there for a while, chatting on my cellphone, feeling very much as though I was still in the Hitchcock film, in some nowhere crossroads, with some catastrophe impending. The building is right next to some offices for the water authority, which did seem to be populated on a Sunday. Since these are Homeland Security protected sites now, I wasn't sure about getting pulled over again. I remember once or twice in Taiwan, innocently taking a picture only to have some guard appear seemingly out of nowhere, becuase I'd managed to take a shot of some infrastruture installation. I think they were paranoid about having targets identified by mainlanders.

Well, that ship has sailed, but still it seemed as though I should keep moving. Heading back along the trail, I couldn't help wondering about the legislative process which created this path, apparently just for me. There was landscaping and new planting, and the bases for what promised to be some nice lighting, although such signs as there were all seemed to indicate "closed after dusk." Government decision-making can be so confusing sometimes. 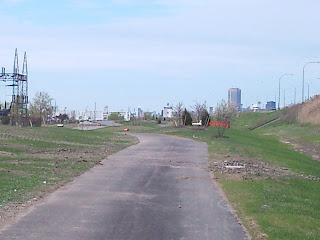 See, there's Buffalo rising in the distance. I did notice, on my way out from the Boat Harbor, that there is another paved bike path which would take me down past the Tifft Nature preserve. I almost can't imagine that anyone else would ride this one, but there it was, just for me. 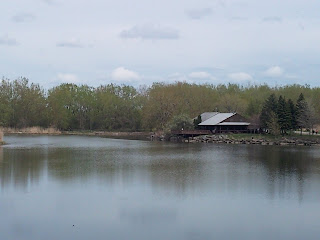 I decided to keep going, heading into South Buffalo. By now, I'd gotten familiar with the expectation that the bike path would end, but I was pretty sure that I could make my way back home along South Park Ave., and that it wouldn't be much longer than the way I'd come. Perhaps less desolate?

But there is a really long stretch of Fuhrman Boulevard where I did actually pass another biker, though he was walking his bike along with fishing gear and looked to be heading to where I was coming from. Another view from another bridge of another way in to Buffalo: 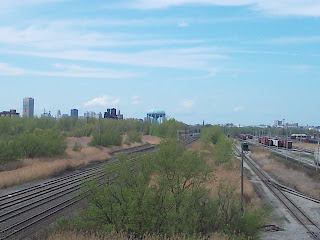 TRACKS WHICH USED TO GO SOMEWHERE?
Anyhow, along I went, catching the flag on the huge South Park high school through someone's back yard. This one doesn't look quite so stately as the Bethlehem Steel offices - it must have come along at some more modern period of efficient production. I used to supervise student teachers in this facility, and let me tell you, there is a kind of martial efficiency going on in there. 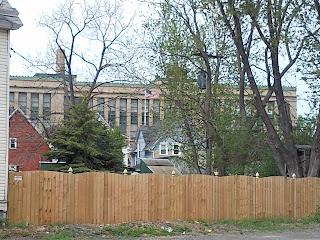 Well, further along was an older, more stately school, where the kids had a bit more freedom 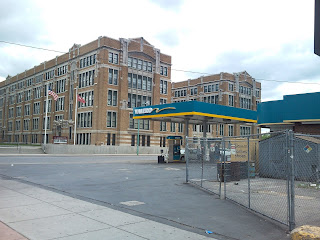 Still, you can see the direction of things. Now, a lot of the schools I rode by are special "charter schools" where the thing to do seems to be to find a theme and move backward along the liberating assumption that all kids would benefit from general education, and maybe try to fit them sooner into whatever it is they're most fit for. The funny thing is that this just seems to leave the ordinary public schools whose purpose still is general education full of those kids who aren't fit for much. Anyhow, I'm sure glad I never had to decide about my fate that early. Otherwise, I'd be stuck in it right now, you know, having a clue about what I'd like to do for the rest of my life.
Well, I have lots more pictures, and thousands upon thousands more words. I really wanted to paste up here the pictures from a recent canoe trip when I saw the other side of all these things from the perspective of the Buffalo River but paddling a canoe in the city is even stranger than riding a bicycle, and you'd probably get really really bored. Or maybe it's just me?
Anyhow, it's really really hard to see any sort of renaissance amid all this vacant space where things used to get made. I even saw the offices of the massive hydroponic tomato greenhouse complex which was being put up during one canoe trip, and magically disappeared before the next one. I should have been reading the Buffalo News every day, and then I would have known what the heck was going on, you know? The headquarters still looked pretty spiffy. Maybe they sold all that glass to Dubai or Abu Dabi or something. Like they need greenhouses in the desert. Oh.
Well, there it is. My city. It used to be a thriving place, just like I used to be a young man. You have to squint really hard to see a bright future. For the city, I mean. Obviously, I won't be getting any younger. You know, we're all doomed by our astrological accidents, like who we chose for parents, what the great roulette wheel in the sky had in store for us, whether we're on this side or that of some border or other.
These are all the accidents of birth. Sometimes they become the accidents of death and dying. Sometimes it's how you look at things. To tell you the truth, when I ride (or paddle) through Buffalo, I see lots of possibility. It's like a blank slate. We could try other things besides letting global capitalism put labor against the wall of too cheap to meter. We could take the oil out of most production processes and bring the work back home. We could make it really costly to commute out to the lawn-belt, and by mixing it up a little better, make it really safe to live in cities. Modern industrial production doesn't even need to be hazardous or exclusive of kids who might want to learn.
These are choices, which bloodlines are not. Or maybe we really don't care about what got us here anymore. Well, at least the cars did stop to let a few geese across the road. If you squint, you can see the chicks. Peeking out behind the old grain elevators are windmills. It's easier to see possibility in Spring, don't you think? 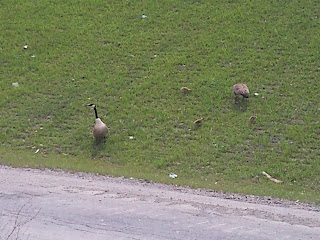 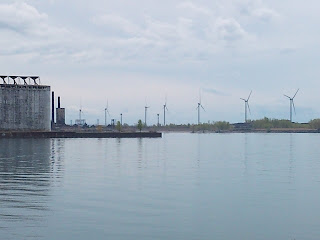