"Home" for the holidays, I have to turn on my legacy computer to redo my taxes, since who knows where the TurboTax CD went after my daughter used it, and I don't have a CD player on my more-often-used mini-laptop anyhow. It seems my daughter and I have both claimed her as a deduction, and monetary pain awaits one or both of us but far worse might be in store if one or both of us fails to face the music. 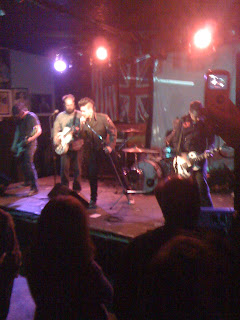 But I'm wise to pain. When I went to hear my nephew play - well OK scream - in a Clash tribute band, I wore my chainsaw earplugs, no matter how stupid they looked. I glanced around and saw quite a few more discreet earplugs among the throngs, but I never did care for cool all that much as you can see . . .

I think my nephew put a bit more into his act than Phoenix did. And he had to do this in front of his entire extended family, and so what can an actor do that a rock star hasn't already done. To abase himself. Although a tribute band is not quite the real thing, I guess. I guess genuinely mentally ill people get no credit for being themselves either. Just now I said the chaplet of divine mercy with my schizophrenic cousin, and neither of us was really acting, although I can't say I think reciting this does a damned thing good for anyone. Well, except for my cousin who is comforted by my recitation.

And as you can see in the previous post, I also helped my bro-in-law pare down a video of his recent Big Wall Climb at Yosemite which is fairly real, but not real in the sense that there's real danger other than to be caught out while having medical issues or something. Or miscalculating on the many layers of redundant protection. It doesn't look all that fun to me, but that's not for me to say. Fun and thrill and danger for me consist in tapping on this keyboard here and now.

So, I guess I have to go and bring my old legacy computer up to date. What a pain!! That must be what it would feel like if you could freeze yourself and then boot up in some future date when there is a cure for mortality. You'd have to update all the virus protection and patches before you could even get to work, not to mention the glitches in the tax code embodied by that version of Turbo Tax which apparently wasn't adequate to get you to do it right in the first place, which along with the notice that all the money I've paid out to keep my VW going beyond any reasonable lifetime is maybe reimbursable since the issues I had were issues that everyone was having but didn't catch in time like I did. I mean I don't exactly feel cheated or did I just cheat death which is what should have happened to everyone who was so victimized by something falling short of perfection and having to be paid attention to in order to remain viable????