Your feckless correspondent finds himself, of all places, in the grand city of L.A. where he is company (no bona-fides) witnessing the annual gathering of literary types from across our land. I have nothing in particular to do and so I have enjoyed walking (!!!!) throughout the city. What a city!! 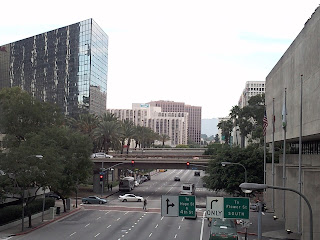 Having just written about Buffalo, again, and being among those who "talk proud" of that city, it does have to be said that the worlds' great cities each have something about them which leaves a city like Buffalo, well, in their dust.

I've been to a few, and have gotten to know each quite well in my time - that would be the old days to most people since I'm not a jet setter. I bar-tended in London, and worked as an au-pair in New York. I studied Chinese in Beijing, and have paid more than a tourist quick stop to Toronto, Seattle, Chicago, Boston, Madrid, Paris, Hong Kong, Shangai, and now L.A.

Each of these cities has a distinctive personality - something that makes it unmistakably itself and not even remotely confusable with any of the others. But each is also of such size that it can be said to embody a near infinity of diversity and choice; things to see, things to do, places to be surprised by. 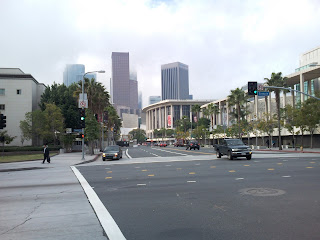 There is nothing in the world which could have prepared me for L.A. I've seen images, and read stories and of course we all have a televised sense of what L.A. must be like. After walking as much as I have, it all starts to feel something like familiar but it's definitely not like anyplace else I've ever been. 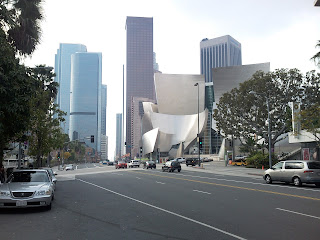 I don't think it's just the architecture, or the distinctive way public and private get merged, though in each case - and I'm sure the weather is a factor - there are spectacularly unique things about the way it's done here. I gawked at the "post-modern" cathedral, and especially its catacombs: financial footing and foundation for the building's maintenance. It's the only time I've ever seen anything "modern" worthy to be put alongside medieval cathedrals, although I'd have to be on the side of those who must have protested the extravagance of the project. Well, especially given where the Church's money has all been going.


I ducked into a nice bookstore in Chinatown, and asked the very well-educated proprietor if he might suggest some modern novelists for me to practice my Chinese with. Ten years ago, he said, there was still a lively trade in literary works - novels, poetry, that distinct Chinese essay form san-wen. But he complains that no-one reads anymore, and that I must read more than his Chinese customers. The old ones too, I ask? Well, if they're still alive he shrugs.

I don't know if it's just that the Chinese have moved up and out of Chinatown and he doesn't get the literate customers anymore, or if that general sense of things descending ever downward has infected him from American intellectuals. Or if what he reports is literally true. No-one reads anymore. Well, he hadn't heard about the MLA coming to town either, and that's been prominent on the news. Even for L.A., it's a big deal, with upwards of 9,000 participants. I guess the action's in Las Vegas for the Consumer Electronics Show. Alas. Still, I have to say there's nothing like a world-class city, and I wasn't prepared to find one in L.A. All we hear is sprawl.
Posted by Lex at 7:52 PM