I first saw the sign "in person" after climbing up a long set of steps from the walk of stars in Hollywood. The steps took me inside what I think was a shopping mall, but I'm not so accustomed, yet, to the strange inside/outside mix that is Southern California.

Although there weren't many people gawking the way that I was, it did seem as though the architecture of this place was designed to frame the iconic sign up in the hills. It also allowed a view out the scruffy back door of the place, and I suppose the sign itself isn't that big a draw anymore. 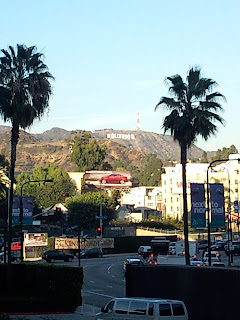 You'd think there would be an exclamation mark on the actual sign. (Oh! There almost was!) It stays put though, as though the place might prove as ephemeral as its productions were it to stop promoting itself. It was never a planned thing; having been erected by a real-estate developer, it used to say "HollywoodLand."

I just witnessed our annual mass-mediated (not massive enough this year is what I hear) contest to sort out who's best among those who've already won  at the Oscars. I gawked along with the rest of us who are certainly not in the game. But it's not like an Olympic contest. I could do what they do, right?

This is ground zero for style in the midst of all the uplifting story-lines of the year. People are crying out against dictators "enough already!" Rampant capitalism is chastened by oil spills and media exposes of direct harm caused to people by careless scrambling after winners' gold. Even in China. The usual stuff.

The Oscars are all about style - even in our choice of what to watch in the documentary department. Michael Moore is out, Banksy is in. It's not quite cool to promote yourself on the backs of real social issues. It's cooler to remain Anonymous (losing must have been part of his plan) and just to poke fun at the process of sorting out the cool. Everyone gets punked, especially if they think they're talking to the Big Studio Director (you've always gotta watch out for sleepers from Buffalo).

I'm still looking for a good replacement for the term "po-faced" to describe the bizarre condition of someone in an ironic posture to the world who feels himself in earnest. This is the condition of religionists being indistinguishable from satirists, or like that Kung-fu special I saw on the "Iron Crotch" school, where you train yourself to lift weights with your penis. Hey, you really can't make this shit up!

The thing I really want to know though, is how come we're all so obsessed with contests? Technology in service to winning?

Our economic system is organized around winning, a contest of value and production. This all starts in school where standardized testing helps to predict who might be a winner, and funnels them to the most privileged position at the head of any class. Which is fine as far as it goes, and as long as you don't have to sleep with the producer to get there, but what about the rest of the students who really just need some feedback about what they need to work on?

Well and so the world is being neatly divided between people with an ironic posture on everything and the rest who are either Born Again, Republicans, Chinese Communist party hacks, Chinese elite Nationalist students in America, Singaporeans, or just plain old machines. No irony.

See a machine would never be able to equate gold with poison thus:


There is thy gold, worse poison to men's souls,
Doing more murders in this loathsome world,
Than these poor compounds that thou mayst not sell.
I sell thee poison; thou hast sold me none.
Farewell: buy food, and get thyself in flesh.
Come, cordial and not poison, go with me
To Juliet's grave; for there must I use thee.

And crazy people all over the place are still wondering what will happen when machines become conscious. Sheesh! Look around!! You don't need the Hollywood hi-tech special effects version. You don't think it's humans wrecking the earth, do you?
Posted by Lex at 7:57 PM