I Went Swimming While No One Was Looking

I did. I skinny-dipped below Niagara Falls, just out of view of the hordes of tourists. Often enough with nude sexed companion. It was always nice. It was always exciting. Now I swim in words, seas of words, trying to make sense. Along the way, I caught a dose of COVID-19. Thank you Jesus, because now I have some immunity while others scramble for codpiece cover in some herd or other.

There was no sense, except, perhaps that I masked myself stupidly, re-using disposable disguises and thus recognized, once walking along with my little one who will always be my little one who might have caught it that way from me. There is nothing other than random here. Nothing to write home about. I isolate myself with words anyhow, and by rights, well there are no shoulds and shouldn't haves here anymore. It might be in God's hands. I wouldn't know.

Watching Bryan Stevenson streaming tears. My little one who left the NICU no larger than dolly clothes, torso in my palm, introduced him to me virtually. She fights for innocents too. He may be her hero. Now he is mine. She has always been mine.

I don't generally know if I'm moved or if I'm touched or if I'm even inspired by words anymore. No longer there, physically speaking. There are just too many of them, and they make their own sense anyhow, so I don't have to do it for them. To be moved, after all is just the passive case that we've reserved for emotions, which are felt rather directly rather than to be paid directed attention. To. I always know when someone's watching me. Thank you Jesus.

Too bad really that so many now feel the same need that I do to torture words, which never did anything to me. Too bad really that we have decided that free speech must include protestations of hate, and vile pronouncements of evil intent. I thought that yelling Fire! in a theater was actionable. How could it be meant ironically? How can such jest be so infinitely tolerated, anymore anymore anymore.

When hate is serious it deserves only to be silenced, when hate is enacted it moves people to do bad things in return. They have no choice then. I will keep and bear my arms hugging myself at least until I am allowed to arm some other. I would move you in some other direction.

There is no truth or consequence when everyone can say anything in whatever sized crowd, the unknown unknowns where only the lowest of the lowly make pronouncements. Jeopardy. Double triple over and over and under again. Like weaving the seat of that old chair which supports my bottom again and again now that I've rewoven it again and again. The doing hurts my back and not the sitting.

If words make their own sense then why do we think they can save us if we only find the right ones? Isn't that just sociopathicologically idiotic? We must elect our words selectively, selectrically or Google might select them fore us aftmentioned afore. So nice to see you anymore. May I?

I went swimming in words while no one was looking and found enough sense there for all of us. Please, have some. They're homemade.

Yours are certified and mine are certifiable and who can trust the alphabetic code on the boxes of masks to validate their worth as though your life depended on it? I have been offered many many degrees of distinction if only I were willing to work for them. I am normal now. I make offerings all the time. Response to stimulus is to throw it back to the other side. Spend it wisely, because, so far, I still pay my rent underwear.

Heavens calligraphic Chinese words can be impossible to read. Even those of Chairman Mao, for whose words China still pays out in freedom. You have to know them glancingly, those Chinese characters. You have to know them at a glance, the way you know old friends though they be walking across the street, say, in Shanghai. Who knew?

Shanghaied over some rainbow, where pots of gold are a passcode away. And little ballerinas were there for Degas' prurient captivation, so say the times. Who holds us now? Where might we go when this is all over?

The Place. Where drinks are served out of doors. Drink up please, it's time. And yet the game is not over, please. I actually used to say that with my official voice in London every single day but Sunday. Eating fishheads beneath the hatch during the midday closing, then sunbathing I Hyde Park, before the Warming, the evening shift.

Way overboard, you say? How far is too far then, if you're going overboard. Isn't it only a digit? May I please expand my mind? Sure it fills the cosmos, but that's only my cosmos. How's yours doing. Off with his head. The republic is dead. Wave to the flag now, sweetie. Good bye. Hello! My constitution is frail. How about yours? 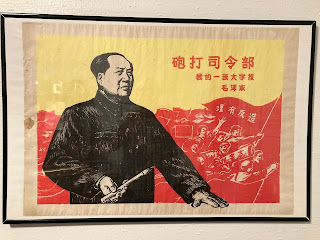 Long live, no not that one. The new one. Older still. Blow up the headquarters said Chairman Mao to the wind as he blew.

I walk as though on stilts, stilted my talk around the corner making a fool. I should wear, I should blare a crashing tophat. I would be thought captivating again, head over stiletto heels. Drop knife drop kick wide right over your head. Posted shafted I live if I shiv, skewer a string of words and make them song and dance.

Two trains of thought were about to collide along the self-same way. How do you do? Asked the wave of the particle. I don't. I just am, now that you take notice of me. I just am. And you? Do you wave to everyone, then? Or is it just me.

I am nothing special in my delivery. Forever stamp for me. Forever posted. Forever pegged. All will flow past in streams, caring not for my signposts.

Forevermore quoth the raven blackened by ink. Blackened by smoke and therefore lasting until needless unearthed eternity, well, because nobody even forgot in the first place. But it did still say the same thing.

Where there were striding idiot winds strident in their expression, overrunning sense running on and now. Oh yes, we did not plant the bait. It was no man who did it, but a babe in palm in fronds who placed his body there. Its? Their's? There there. The door is open. Storm!

And now those hateful babblers must own their words in deed. For in deed they have condemned themselves and they have lost any right to speak, to freely write, there was never any free speech, to say abominations aloud for we forsake them now, and let us pray forvermore. To damn hate to hell would be redundant. It already abides, and so must we. Good bye, fare well, so long, it's been good to know you. See you tomorrow and the next day, then. Adieu. Adios. And after that as well. Down the welly well well now.

Was it counterclockwise in the Northern hemisphere, swastika down the drain.

It all plays out rather swimmingly, don't you think? Who could have known? Their intent was deadly, their execution a farce.