Dying to Live, all Over Again

Sorry, dear reader, I've been blocked up for a few days here. I have lots of posts in the can, but they just aren't working for me. So I thought I'd take a little excursion in the direction of dying for life. I've written lots before about how, when I nearly drowned, my life was before me in the instant of checkout. This time, it was a little different.

This time, in the ambulance, I felt no static perfect recall. No panic. No screaming for breath. I felt more watchful. The symptom was "can't catch his breath" but that's not what I felt. I felt calm, and they had some kind of oxygen monitor which showed good, and I was breathing oxygen, which should have suffused me with a sense of wellbeing, more like what I felt when I sat on someone's stoop during my walk. But I felt old and nearly gone.

I wasn't hyperventilating, and I wasn't blacking out. I wasn't really nauseous. But I felt as though I was receding and that it might be terminal, and I wondered out loud why the ambulance was moving so slowly and how it could possibly take this long to get to the hospital right around the corner.

I think I just felt like a very very old man who was on his way out for good. As though my body was receding from me. Although I do remember getting up to pee from the bed in the ER and I must have walked and I could stand, but then I also remember watching old guys stride past in ways I could hardly aspire to. Literally.

One of the things I started to write about yesterday was Steven Hawkings' statement that human evolution should be considered to include our literary, scientific and, in general, our civilized production. But then he related it all back to what we would be able to do, consciously, to improve our genome.

I'd thought for a minute that a guy like him, with blasted body and brilliant mind, would be awakened to the fact that evolution will never move in the direction of "improvement". Improvement in this case is presumed to be conscious intervention in the human genome. Which will improve our body's survivability. Which, without enlightenment, will only ensure that we have improved to the point of living in an environment created by our own effluent which is to say that we will be all that remains. If there were anyone around to read it, the epitaph would read "success as locusts upon the earth". 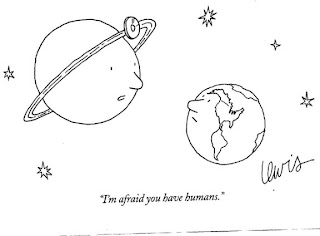 Every excremental process is self-limiting without some ecology of competing species to reprocess the waste, and we've removed ourselves now almost completely from that. Our autoimmune pathology still fails to give our conscious minds a clue. But a plastic world of eternal excrement is a dead word already. When there is nothing but consciousness, no matter the physical substrate, then the life will already have departed.

So, while I agree with Hawkings that Humanity continues to evolve, and that consciousness represents that truly human aspect of our being, he still doesn't get that consciousness is not "inside" any one of us - no matter how brilliant - but rather is epiphenomenal; riding, as it were, on our physical genome. I have to disagree that there can or should or will be any feedback loop into the genome itself. Except to cure individual disease when our evangelical truth-betrayers get out the way of scientific good will. They should all get a life already.

If there is - and plenty of sociopaths will attempt it - "improvement" to our breeding stock, it will finish us as a species, both literally and eternally, and that will be the end of that. Completion is never part of evolution. Being done is not the same as being alive and in process of evolution in some alive context.

These sociopaths will have been disgusted or betrayed by their personal physical manifestation, and will wish nothing like it on their progeny. And then we will seal our fate at the moment of our triumph. As my new T-shirt will say - the one to replace the "Unionize Walmart!" T-shirt in imitation of the Walmart logo-font which I have yet the courage nor money to produce - "Any One Success Can Finish You Off!!"

The missing link in our conscious evolution - or rather in the evolution of our consciousness - is to awaken to the existence of emotion in the actual cosmos around us. We consider this to be at some ultimate remove from our physical existence, like some sort of froth we can blow off the scupper before inhaling the brew. Something in the way of enlightenment, in just the way that a woman's beauty is in the way of her wanting us back.

But without construing each of the couplings in the muck out of which we grew to be some sort of emotional - very much as opposed to random - we truly are that dead and numb and cold already. We are in that place where I was heading, calmly, on the way to yet another second life all over again. From the hospital, reborn. Where once before, when having my appendix out perhaps, they found me in their computer which had been backfilled to my arriving there on day one.

These emotional connections are as real as are the ones which lead to genome's elaboration in the physical sense. We can catalog those connections in reverse and watch how the ecological niches swarmed along, ever retrofitting their organismic denizens, according to this or that cosmic stimulus and response. But, looking forward, there's no telling which way the winds of fate might blow. There's only feeling, a gut instinct as it were, and some kind of flying by the seat of our pants.

The enlightenment I seek - and you should too - is not the kind which would lead me or us to understand which inventions and interventions can save us from ourselves. The enlightenment I seek is the kind which would include rather than exclude all humanity in a participatory conspiracy of all mankind. Just like when we let women in to the enterprise, and more recently (or was it less recently?) blacks and as though by magic the collective brainpower applied to our collective survival expanded exponentially.

Just as how the Chinese discovered that by removing controls, their economy showed its inner life almost overnight. We should let in the poor and the wretched and the culturally weird. The same exponential math applies, and is not necessarily any threat to those of us who sit at the pinnacle looking down to instruct the unwashed masses how they too can get here if they only follow our example. As though luck were not the major factor in our personal rising. Luck defined simply as the refusal to acknowledge the love. Narcissism writ very very large.

There was such a powerful glimmer at the founding of our Republic - in the collective eye, as it were - of the right of every man (sic) to be considered human. And now we allow our corporate entities to turn us back to slaves. Gaming our learning curves, they make unconscionable profits from our calculated desires to maximize our minutes, press the limits of our cash reserves and credit lines, stay this side of dead and guess the moment before the prices drop so that we may have tomorrow's high tech today.

Our republican insight dims, and the Huns once again rampage the earth. This time, Oh China! it is not clear that civilization will prevail as it has so many times before. But for so long as there is love and life there is hope, Pandora, there is hope.

OK, so where does that leave the evolutionary process? Miscegenation for sure. New memes from unthinkable places will infect our cultural production. The wine which so offends my liver, will elaborate itself in ways which challenge my certainty that its subtleties are reserved for those who can't see that the emperor is naked. And Steven Hawkings, alas, will be wrong again. His blasted body needs no repair. It hosts his glorious mind.

And corporations will keep their dirty mits off my genes and my gene pool, which will evolve all of its own, by random couplings in the dirt. Otherwise, the Huns will continue their march of rape and pillage and twisting bayonets in the stomachs of young girls when they are finished with them. As the Japanese did in Nanjing not so long ago. And we credit only the industrial killers in Nazi Germany. Eugenicists then as now.

My God, why so gloomy? Humanity will prevail, as will life, and the basest instincts for personal salvation will recede, as ever, beneath the wave of love which is true to God, the one who cannot be named or sexed or aspired to, forever removed, amen.

This then, is my New Year's Resolution, somewhat late. I call it a new improved resolution, more pixels maybe, toward that clarity which removes intention from all directions for improvement. Which prioritizes love and life and therefore which allows death as part of the natural cycle and doesn't celebrate perpetual me so much. Perpetual me drones on and gets boring really fast.