I hate that term - Californication - I feel dirty just to type it, as if the only purpose of California were illicit pleasure. The first time I heard it was as used by the more authentic seeming (to themselves) folks up north on the West Coast; Oregon maybe, in the late '80s.

They used it to describe the process of invasion by the moneyed boorish interlopers from their south. Just now, I was continuing my read of Melville's The Confidence Man on the way down here from Seattle (here is SoCal), which ought to be required reading for every American of whatever state. It puts the lie to anyone's notion of authenticity.

Californians are often envisioned by others to have an absence where culture belongs  - whatever it is that has lead to the big box anti-culture of sprawl which has now gripped us all. They used to make their way up north to stay a step ahead of the California real-estate boom, surfing the economic boom which accompanied it. They brought with them a kind of culture deadening. Some extreme case of the "ugly American" which so embarrassed our brand in Europe. Wiping out any vestige of local roots.

Even though the boom is bust, and Californians can no longer find so many bargains up north of them, it may be that the momentum from those days has shifted our leading edge northward. I'm not in any position to tell, but so far Seattle still seems the cooler spot.

I remember back in about 1975 or so, when I was a bicycle mechanic in New Haven Connecticut during one of my periods AWOL from higher education. There were these Jamaican cyclists showing up around town. They rode track bikes just like they did at home in Jamaica. I get the sense that their motivation was mostly economic, although there might have been a cool factor associated with that economizing drive. You make do with what you have and then you take it to some sort of limit; in this case speed and weight and stark simplicity.

There is something close to joy in tweaking things to their limits, or making something appreciably cool from what might otherwise have been trash. I spent much of my time in Seattle recently struggling for the umpteenth time beyond the point of logical death with "Bob" the 1988 VW rustbucket which my duaghter deploys as "wheels" to get around Seattle. And in the spaces, I was helping her boyfriend with his 1979 Dasher, which, annoyingly for me, had almost no rust at all, although the paint was mostly weathered away. 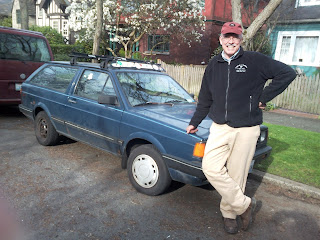 With my brother-in-law one morning we remarked on the new phenomena of gearless and brakeless bicycles among the avant-garde hipsters of Seattle. Unlike their Jamaican forebears, these bikes have things like yellow tires and radial spokes and radical minimal handlebars. Or maybe that is the authentic style. I can't quite remember. Beyond the edge of too much gear, these bikes make a kind of fashion sense.

These bikes make a kind of common sense on an indoor wooden track, or among Jamaicans without the wherewithal for powered wheels. (The boss at the bike shop used to tell us to watch them closely in case they might sport off with a few stray parts, which I think they often did.)

In Seattle, with all its steep hills, to be without gears or brakes is rather more like spitting into the face of reality. This is the kind of Seattle cool - that striving for authenticity I always make fun of - which is hard not to feel contemptuous toward. Do these guys even have a clue about the Jamaican roots of their strivings? And what is it with Seattle anyhow? Is there no limit so extreme that beyond it you can't find a new one?

I speculated that Seattle is the new West Coast terminus - the jump off point - for the American Protestant work-ethic, where to buckle down to hard work and to deny pleasure was a way to earn God's grace, which would be displayed ostentatiously by your outward signs of demure style. This is the New England recititude displayed by striving after Talbots style, which is so utterly non-Seattle. It descends, at worst, into a kind of peri-dinner drunkenness, even while it might still appreciate the true decadence of its artists.

On the Left coast, up North, this America falls off the cliff. There's a kind of confusion of escape from Protestant rectitude and Catholic guilt both, to where there is pride in grunge and shame about all that money. This inverts the core American value structure, even while it has defined the new economy, You know, the one just now so recently past.

But Seattle feels familiar to a Buffalo boy. Most people there are escaping something like Buffalo, where lots of people, if they can survive economically at all, are carrying on the family business, or shepherding the family legacy, abstracted to whatever it is that wealth can still accomplish in a city like Buffalo; something which would require actual talent elsewhere in the country. (This is not meant to be a slam at the Buffalo successful, although the city is pretty well sewn up among the people already in power. Buffalonians blame the political class, but that, I believe, is merely a synechodocal error, if I can be allowed to coin a term. They mistake the part as separate and distinct from the whole.)

California, on the other hand, feels almost entirely alien. This is where, I think, all those disruptive powers against culture, civilization, classic syle, and certainly rectitude, found their origins. There is familiarity in that, but only of a negative sort. Folks here found their success and then turned it back on the country just a half-beat earlier than did Seattle. This was back when authenticity meant riding a wave, literally, and style was breakthrough, not break-away. Hollywood decadence has morphed into web grease monkeys.

So here I sit, in Claremont, smelling the orange and eucalyptus trees and other unknown spring blossoms, and hardly even bothered by ubiquitous automobiles. Having wandered these pristine streets as their only stroller, nodding to the Mexicans perfecting lawns and ornamental plantings, I'm fatigued now.

I write on a new and very little laptop. It cost a small enough fraction of my travel expenses, and the trash-picked one I normally use finally got too wonky with it's display. Plus it weighs enough to equal all the rest of my luggage. In my laziness, and to my surprise, I've left the Windows this new one came with entirely alone. Linux had become too intrusive to my life. Too many updates, too much research to accomplish simple tweaks.

This is not a betrayal of the Open Source ethos, just a recognition that the Operating System needs to recede farther into the background already. I don't care for it and I don't care about it. Fact is that Windows is what most of the stuff you can download runs best on, simply because that's what most people still run.

Google's ethos is all Open Source, but they must be pretty confident that the developers on their payroll will be the ones to carry the momentum forward. The difference between Open Source and proprietary is just a small matter of where the line gets drawn between the ones inside the tent and the ones on the outside.

What is it that allowed Windows to thrive when Apple languished in a ghetto of too-cool for business? There are lots of stories and theories out there, but the one which sticks with me is that windows drew the line at hardware. All sorts of garage artists could tweak their machines, and all sorts of tweaks got incorporated into the business products. There was no barrier at all to developing apps, the way that Apple still insists on.

The Linux guys are still too fascinated by the operating system and what it might facilitate. They've forgotten their own trivial core. Google gets this with their Chrome OS and its presumption that all the interesting apps will be developed for and delivered on the Internet. Things you do via computers will rely on a browser in almost precisely the same fashion that Windows apps once relied on an operating system.

Around here in Claremont where no-one walks, there are quite a few moving shrines to the automobile. How much easier must it be to preserve these cars in absence of road salt!! Just as the sidewalks are only heaved by tree roots and can look new forever. Just as the Mexicans feel privileged to be working on these lawns, small enough to hardly break a sweat. Just as the paint stays on forever.

Apple and Microsoft both must leave behind their fetishes just as these old cars are no longer any good for the newer sprawling lifestyles. The device will itself disappear, beneath an expectation that it will simply work, by touch and voice and intuitive feel, delivering whatever becomes available in ways to defy designer limitations.

But there is one prognostication I must differ with entirely. The word is that television is what will become ubiquitous. Projected images and perhaps voice, because we are too constrained by the lethargic written word. It's not fast enough, not rich enough, not somehow fully enough exploitative of the power of digital reality.

But images all require their contexts in order to remain meaningful. They are as fleeting as a friend's face to a stranger. While the written word is the permanent embodiment of that which makes us human. It informs. It translates over time.

So, I'm happy with my little laptop with full sized and responsive keyboard. Everything's moving in the right direction. Not there yet. But moving, surely, pleasantly, with aroma of spring blossoms mixed with car exhaust.
Posted by Lex at 5:29 PM