Well, I finished the movie, and ate Sunday brunch in that renovated yup-scale restaurant I'd wanted so much to disparage. I move quickly, don't you think? I still don't know the actual fate of the other more pricey restaurant which had seemed to be closing (their website now shows only the suburban location). And I forgot to mention running into a Buffalo Boy at the Greek restaurant in Seattle where I'd eaten with family on the way out of town. Pricier and not nearly so good as what can be had for cheap in Buffalo, I was glad to find out that this Buffalo place didn't renovate their menu right along with the decor.

I should really stick around someplace long enough to get a newspaper subscription again. I just ate at that closed restaurant before heading out West, and then they tell me just this morning that the renovated Acropolis has already been open two or three weeks. I guess I just wasn't paying attention when I walked by during their renovations? But I could swear I ate there. It's all a bit disconcerting. Maybe I was laid up in the hospital or something. Or maybe the switch from snow to spring has me all mixed up. Or. . .

As to the Sandra Bullock movie, well, I'm afraid I have to say that it wasn't very convincing. They'd abstracted all the essential elements for a cinematic narrative which would have to trump whatever the reality really was. Whatever it was, it couldn't possibly have born much relation to the essentialized and slimmed down story presented up on screen. That one was just way too happy. Hell, even the lives I slipped into at that party last night - which are pretty happy lives - have more tragedy than the Blind Side showed. Lots more.

So, it is at least ironic that Jesse James shed a tear hearing the same words that we all shed tears for along with Sandra at her Oscar acceptance speech. Sandra must thank her lucky stars that she called out Merle Streep as her lover, and not that guy who'd previously married a porn star. Which makes me look at that Orange County Cycle show (that's Orange County New York, folks) in a whole new light, as yet another drama of Cain and Abel and prodigality and how affection gets displayed or not. And where's the Mom in that show anyhow? Huh? Such strange bedfellows reality and TV make.

So, I'm working through this pile of mail which had built up while I was away. Almost everything now has some sort of identifying information on it, which just makes me think that I must trot out to buy a shredder like everyone else in the world who isn't wanting to become a millionaire by parading their realities on TV. It's a funny world, alright. I parade my realities all over the place just like the rest of us, but I resist getting a shredder as some sort of absurd lipstick on a pig for someone whose life is all on display anyhow. Although I do wish I'd get rid of my big fat face staring out at the world. I just don't have any other acceptable pictures is all. And isn't shredding what you do on a skateboard in Venice Beach, say, like I watched? I am so confused! 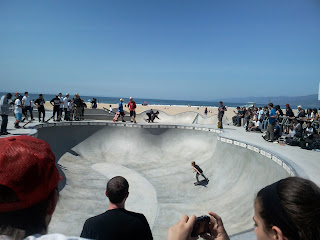