How would one know if Shanghai is being built or being dismantled? Both are happening at a kind of break-neck speed. Both are keeping people occupied and employed. Both form a kind of artistry, for piles of rubble, driven piles erotically flowing shapes of no known human meaning except that they must be possible. Because they are. Today I did visit the Power Station of Art. It was raining and my back has been responding by spasming promising to take me to my knees or less. My own internal architecture bodes disaster.

Where, on the way that subway billboards seem 100% electronic, and so they can change at a moment’s notice or without notice or maybe someone plasters up new paper during my nights here. There was a one depicting cozy living space to fit a kind of company logo here:

On the nether side of the subway, wait. Never wait. You can see that this is a cute living space tucked into the shape of a cute kitty cat logo. But I wanted to live there, it's so cleverly arranged. Perhaps there might be a stack of them, although I couldn't remember where the doorway was until looking back at the photo. I think I did imagine that I could fly in from above.

I asked the gated community uniformed gate-keeper what was the almost uncreditably huge building there, after I emerged from the subway stop into a depleted landscape of rained out, and he asked me where I wanted to go. I said the art gallery, and still wondered about the bigger building because my GPS on American military satellites, I have to presume, was keeping me from needing actual directions.

I needed the other kind of directions, and he said "ships and shipping" and I said "Oahhhh . . . " in that Chinesey way which means something like a much longer dentist ahhhh, but pronounced in a way to simulate, well, marvel and understanding at the same time. Really. The scope can't make it through the photo, and it's a wasteland inside, though the designer claims on his site that this is one of the few pavilions which will remain open after the expo closes which is some time in the past now and isn't hardly. 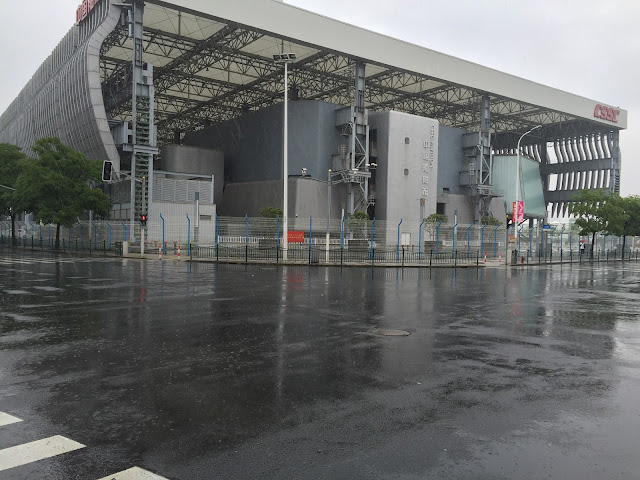 And it gradually dawned on me that I was in the wasteland of only 5 years ago, the Shanghai Expo, which explained the strange combination of abandoned and falling apart with weeds reclaiming almost everything and aspirationally futuristic still. Explain would be the wrong term. Ohhhh . . . 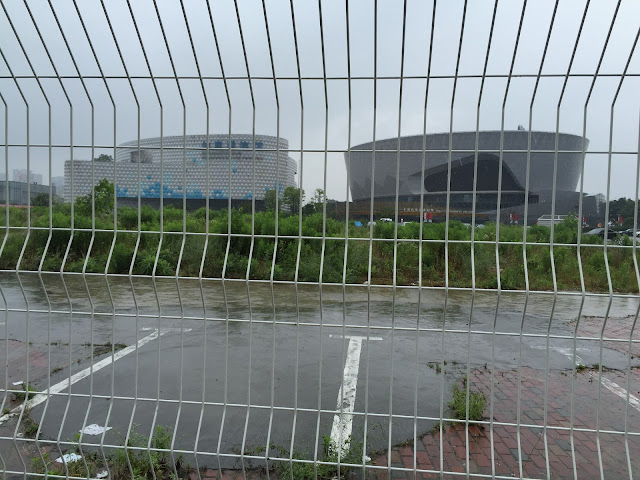 And I'd thought this performance space was under construction, but it was not. It was being reclaimed from the top of the Power Station of Art looking down . . . . 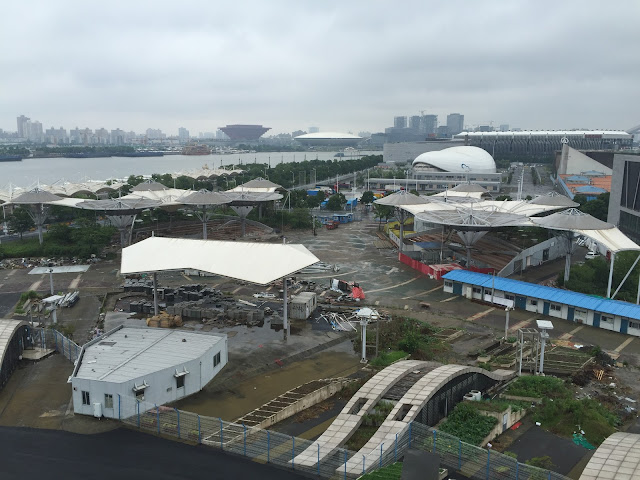 But so how would I know what I was getting into, arriving with boatloads for shoes, sopping, and line of brand new Audi TT's perfectly parked and into whose tony space I could wander as clueless foreigners almost always can after getting a condom on my bumbershoot and checking it to keep the water out. In. I wanted to empty my shoes. 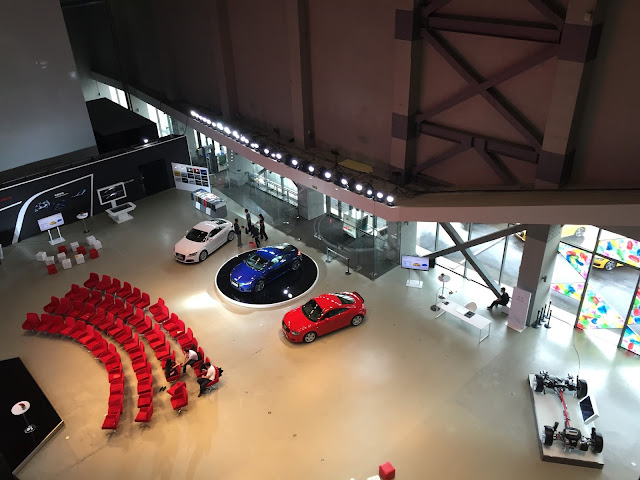 That's the view from above after I wandered skyward, and you can still see a yellow one of at least 50 which were strangely driven away in military precision after the proper audience started arriving from which I must have been excluded although by that time I ceased and desisted to care.

Since much to my astonishment and actual near constant tears which were most likely not because of my back, although I really couldn't tell since I keep falling to my knees, most of this massive one-time actual power generating station/plant which might have been removed for pollution control or for the expo same thing, was devoted to a series of architectural shows, once you got beyond the Czech Republic guanxied installation on the ground floor which started the tears flowing but had nothing to do with architecture except for calling attention to the space where it was installed. But it was stunning and like all of Shanghai, made me think that nothing really is going on in the US, except how would I know since I've been mostly in L.A. which might as well be China and I'm way out of date on Manhattan, where back in the day all this got inspired I still think. Maybe, be not proud. 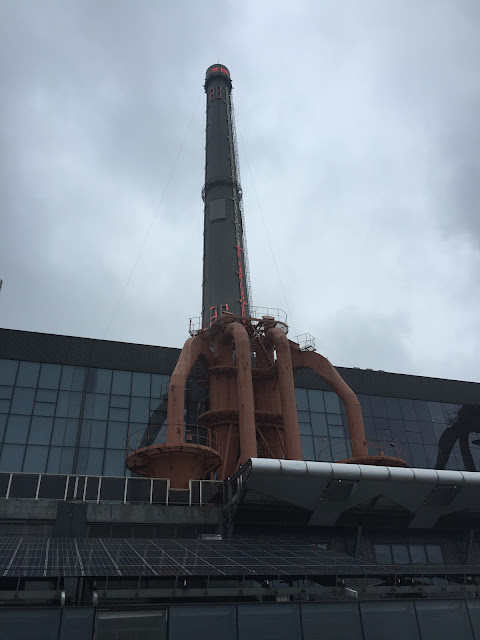 It is a giant thermometer, actually, what were you thinking, but on let's say the third floor - and these "floors" are at least 30 feet high, or maybe 20, there was this Yona Friedman whom I'd never heard of but wished that I had, because his was called "Mobile Architecture" and composed a cosmology of spaces and urbanism and how we know ourselves by our feelings in our spaces, which was art worlds distant from cute for sure. And I would have paid big bucks for one of his books, but none contained all the expressions which were on the wall, and I thought it would be just crass to catalog them for my little self, so here you go . . . 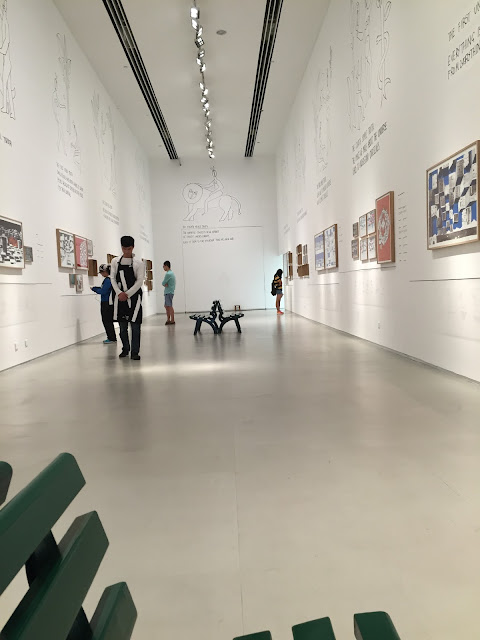 Where down at the end, I don't know if you can see it, the one of perhaps a dozen aphorisms says that "The Universe Consists of Infinite Micro Events, Each of Them is More Important Than Are Large Ones" which about sums it up you'll have to take my word for it, but it's close or nearly there. After a kind of "in the beginning . . . . " in near Chinese Tao De Jing prose, from realizing that you are small and small is bigger than big but without any others you're nothing and so forth. Next room was a workshop space where people did construct some universes . . . 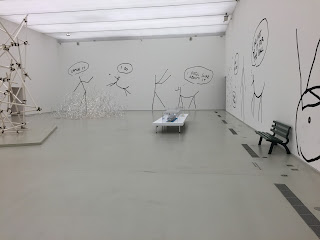 Which I will leave diminutive in the interests of space. Then sandwiched above the creampuff work of Andy Warhol's buddy Michael Chow whose affectations put me off a just bit, although I swear I saw his father perform a breathless seminar on Peking Opera back when he would have been about 90 talking moving leaping and never losing voice. "Voice for my Father" was the celebrated work, and it was far too wonderful to linger, honest, because by this time passing works of Julian Schlabel and Peter Blake and Ed Ruscha Keith Haring and so many more was more than I could take and so I thought why not to the top floor and who and who should be there but Renzo Piano represented by his many designs in another workshop style and I about died so I went outside on the roof or tried the almost empty by rain (there was epic flooding but how would I know, so much of my time VPNing out of country) museum cafe which seemed lovely but I didn't want to affect that I knew what I was doing here there. 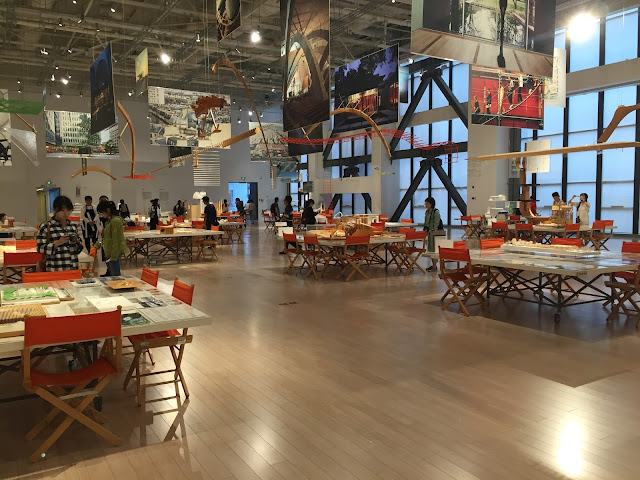 This vaulting beauty and you can't help but think of Ayn Rand, the asshole, as something which cannot possibly still exist in Shanghai, not in China yet where beauty remains an afterthought for somewhere beyond the 40 years that things are built for and before the 99 year terminal lease runs out. Unless Gensler designed it which about says it all in the realm of yeah but it's sustainable and green, right! It has to be sustainable, which pretty much says what it says about little and big. Could a grass hut bee LEED? Certified?

So do they still need some God aspirationally installed at the root of what was hacked out generationally ago? Is that the difference? God no, I hope not and don't think so because it still has to be the Qi even without knowing about it, at least they don't have to go through the stages of many to one to gendered to disengendered to beyond God our Father projected on infinity which is way more than an affront to the sensibilities anymore. Really?!?! Behind the scenes is this, Brazil: 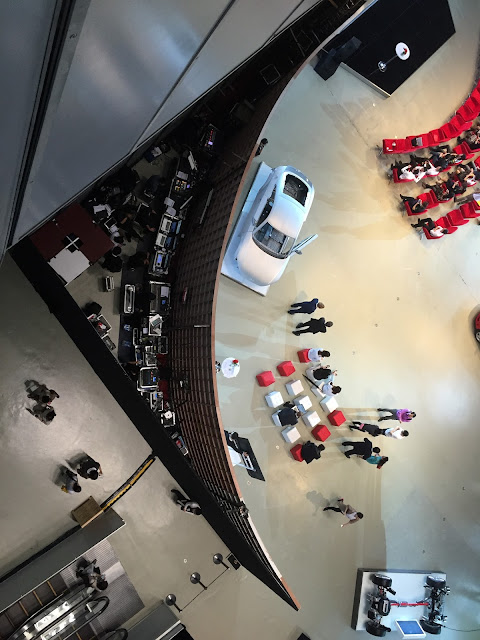 A mountain of raw technology. I ask all the time the secret of China's growth and I get the obvious answers, mostly leaving out the consumer grant of factotums from the US factor; you know the gap mind the gap with catch-up played that much more quickly than the original tune a nod to education which has always been important but now is really just a game, and my conclusion is that it's just flow. We were once and ever shall be, world without end, but it's coming now.

The traffic in China works this way: You are only responsible for what's in front of you and you might sound your horn if you're pushing from behind, but rear-view is meaningless and if you hesitate while the hoards are exiting the subway you just won't get on, and you have to lose the feeling that there's something rude about that little diminutive thing who pushed right in your front. Because you failed to do your part and slowed the whole parade, which isn't quite the same as paying dull attention to your smartphone as people push you through and over and in. Mind the gap. The smartphones miraculously continue to connect underground, or people might look up and do something other than the smile they grant their phones and niceness all around you.

I do think that some room for reflection wouldn't hurt a bit. But they need to clean my room now. No nevermind. How? I must decamp. It's just desserts, fried banana, fired with ice-cream, in Shanghai, really, toast of the chef and no charge to me. We are fiends now on WeChat.